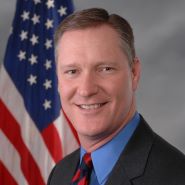 The Ohio Chamber of Commerce has announced the hiring of Congressman Steve Stivers as the next president and CEO effective May 17, 2021.

Stivers who will succeed Andrew E. Doehrel who is retiring and has held the position since 1993, is expected to resign from the U.S. House of Representatives to take this position.

“After an extensive search, we are excited to share that native Ohioan, former state senator, current U.S. congressman, and current Major General in the Ohio National guard, Steve Stivers, will become the next president and CEO of the Ohio Chamber of Commerce,” said Chairman-Elect and leader of the Ohio Chamber’s search committee Frank Carrino.

“We had many outstanding applicants for this top-level leadership position, so the committee invested much time and due diligence in the search.”

As president and CEO, Stivers will lead the Ohio Chamber’s 8,000 members in advancing its mission of aggressively championing free enterprise, economic competitiveness and growth for the benefit of all Ohioans.

“Prior to running for office, Steve was an active member in the Ohio Chamber of Commerce serving on various committees,” said Chairman of the Ohio Chamber board of Directors Jeff Walters who is a managing director for CBIZ MHM LLC in Akron.

“His business background combined with his political acumen makes him the perfect fit for our next leader.”

Stivers has served in the U.S. House of Representatives since 2009 and has been a member of the House Financial Services Committee throughout his tenure. From 2003-2008 he was an Ohio State Senator. Prior to running for office, Stivers worked for the Ohio Company and Bank One.

For 30 years he has been a member of the Ohio National Guard and was deployed overseas multiple times. He earned the Bronze Star for his leadership services during deployment.

Stivers received his bachelor’s degree and MBA from The Ohio State University. He and his wife, Karen, have two children and live in the Columbus area.

Founded in 1893, the Ohio Chamber of Commerce is a champion for Ohio businesses so that our state enjoys economic growth and prosperity. The Ohio Chamber has a staff of 19 and is located directly across the street from the Ohio Statehouse.

Deba Uwadiae is a Nigeran American international journalist, Editor-In-Chief and publisher of the New Americans Magazines, Columbus, Ohio, United States. He has reported events and stories from different countries in Africa, Europe, Asia and North America.
Previous Post US begins implementation of Open Skies Air agreement with Republic of Congo
Next Post Ohio Secretary of State Spotlights Lawn and Garden Businesses in April